Bhajan Maestro Anup Jalota turns a year older today. And well, after his stint in Bigg Boss 12, we know that Anupji is quite the crowd puller. He might have gathered eyeballs with his stint in Big Boss 12 thanks to his colourful relationship with the much younger Jasleen Matharu. But Anup Jalota was known to the musical world as a proficient bhajan singer also known for his ghazals. He has also done his share of playback singing. But did you know that Anup has also dabbled in the acting field as well? Recently, Jalota was seen in the much-talked about Amazon Prime series, Paatal Lok, where he played the character of Balkishan Bajpayee, a politician. Although his role was small, it was very crucial to the plot and was part of its big twist in the finale. Anup Jalota Feels His Acting Debut in Paatal Lok Was Easy as He Already Played ‘Tougher Role’ In Bigg Boss.

Contradictory to the reports, though, Paatal Lok isn’t Anup Jalota’s first stint in acting. Just like Sanjay Mishra’s character Sudhir in Kaamyaab was surprised that he did 499 movies thanks to IMDB, so we took out of the film and looked into the site to check out Jalota’s acting career. It looks like the actor has done quite a few movies before his Paatal Lok appearance, a couple of which goes back in the ’70s! And we are not even talking about the movies, where he appears as himself singing his own track.

His first acting credit, as per IMDB was in 1978 in a devotional film called Sampoorna Sant Darshanam. It was a small role. 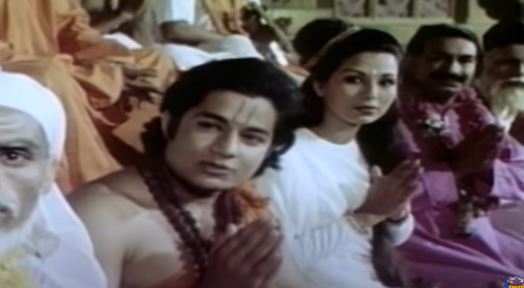 Jalota has done his share of religious films, so yeah, his appearance in Paatal Lok is definitely a radical change. Like take the case of the 1988 film Chintamani Surdas, where he had a guest appearance, playing the role of Tansen.

As per reports, the above song, sung by the legendary KJ Yesudas, was supposed to be for another film, a 1979 movie called Tansen, that the late Ravindra Jain had composed. As the film never made, the song was used in Chintamani Surdas. Just in case you wondered how it happened, T-Series was the producer of Chintamani Surdas.

In 2011, he had composed the soundtrack for the film, Malik Ek, that had Jackie Shroff as Sai Baba. Jalota also appeared in the movie as Das Ganu.

In the same year, he had also appeared in the comedy film, Tere Mere Phere, where he played the female lead’s father.

So going by the singer’s career, acting has never been new to him, but yes, Paatal Lok is Jalota’s digital debut, not to mention his most unreligious onscreen venture to date. Paatal Lok Review: Anushka Sharma’s Amazon Prime Series Is Powerful, Absorbing and Disturbing Boosted by Jaideep Ahlawat’s Knockout Act.

And he is not going to stop there. If reports are true, he will be acting with his ex Jasleen in the film Vo Meri Student Hai. Errr…okay!

(The above story first appeared on LatestLY on Jul 29, 2020 11:10 PM IST. For more news and updates on politics, world, sports, entertainment and lifestyle, log on to our website latestly.com).

Kasautii Zindagii Kay 2: Parth Samthaan To Resume Shooting For The Show From Next Week