Every day, there is one rumour or conspiracy theory surrounding Sushant Singh Rajput’s untimely demise that is being fervently discussed on social media. Most of them are untrue, but they often given the propagators wrong reasons to blame certain people without valid proof. The Bollywood actor died by suicide in his flat in Mumbai on June 14. The police, in its initial investigations, didn’t find any suicide letter. But there has been a huge chatter going around on foul play involved in the actor’s demise. Sushant Singh Rajput Demise: Mumbai Police to Record Shekhar Kapur’s Statement Next After Interrogating Sanjana Sanghi for 7 Hours.

Now the latest rumour going around is that someone edited Sushant’s Wikipedia page much before his death was reported. So the accusation goes about that when the news of his suicide broke out around noon, the history section of Wikipedia shows that the death details in his profile has been edited just before 9 am in the same morning.

Some of Sushant’s ‘fans’ have found out about this and are sharing screenshots of the history page to allege foul play. Check out a few such tweets below:

Who Was The Astrologer?

8:59 am 14th June Sushant’s Wikipedia was updated & mentioned that he is committed suicide!!! Who was this astrologer ???@MumbaiPolice please don’t tell us that he updated his Wikipedia before his death, cause user id is avialable there… #cbiforsushant @RoopaSpeaks pic.twitter.com/3zVgYhQGEd

So Who Updated It?

On 14th June wikipedia updated Sushant Singh Rajpoot suicide at 9.08 AM, and Police says Sushant went to room at 10 AM after having juice.

Police discovers Sushant is dead at 12:30 PM, while wikipedia was updated at 9:01 AM with his status as dead. pic.twitter.com/avVWVe0G5P

How is This Possible?

How this can be possible? According to police Sushant singh talked to his sister at 9am, and on Wikipedia someone updated at 8:59am that he committed suicide!! How is this possible? #AmitShahDoJusticeForSSR pic.twitter.com/bbsEbGteFF

There is no denying that some of the screenshots shared on Twitter are true. Even we found the same details, when we checked the history page of Sushant’s Wikipedia profile.

While the above makes his demise look like a murder plot straight out of the ’80s Hindi potboiler, New Delhi, starring Jeetendra, the truth is far simpler and has no such dark connotations. The edit time on Wikipedia is based on Coordinated Universal Time (UTC), which is 5.30 hours behind Indian Standard Time.

Don’t believe us? Go to any random Wikipedia page, scroll to its lowermost section, below ‘External Links’ and ‘Categories’. There you will find that the page mention when it has been edited last with date and time. And the time is mentioned in UTC time zone.

So if Sushant’s Wikipedia page was edited at 8.59 am UTC as per its edit history, then it comes to 2.29 pm in India. Which is just about the same time, his death reports were confirmed.

The post-mortem report of the actor already ruled out any foul play in the actor’s demise. The police are right now investigating as to what drove Sushant to take this fatal step. So let’s not all fancy ourselves to be Sherlock Holmes and try to find foul play links from the comfort of our homes. Let the system do its job, while we wait for their results. 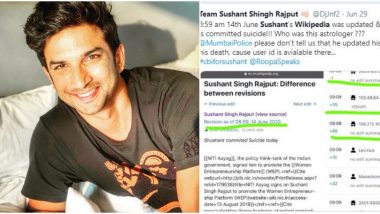 Sushant Singh Rajput’s Wikipedia page was edited before his suicide reports came out.

The Claim was false as the Wikipedia page is edited based on UTC time zone, which is 5.30 hours behind us.

(The above story first appeared on LatestLY on Jul 01, 2020 02:55 PM IST. For more news and updates on politics, world, sports, entertainment and lifestyle, log on to our website latestly.com).