Swara Bhasker’s latest web-series titled as Rasbhari has been the hot topic of discussion ever since it made its way on Amazon Prime. On the show, the actress plays the role of an English teacher whose student gets obsessed with her. While the show is already rated as an ‘adult series’, from quite a while a section of netizens are trying to term it as ‘soft porn’ and have also criticized the show for flashing objectionable content. Even a few days ago, CBFC Chief, Prasoon Joshi had tweeted about how a particular scene where a little girl is dancing in front of men drinking is sending a wrong message among the audience. Now, all this mess have led to the IMDB rating of Rasbhari to 2.7 out of 10 or there is more to the tale. Rasbhari Movie Review: Ayushmaan Saxena’s Performance Saves This Sluggish Coming-Of-Age Comedy Starring Swara Bhasker.

Check Out IMDB Rating Of Rasbhari Below: 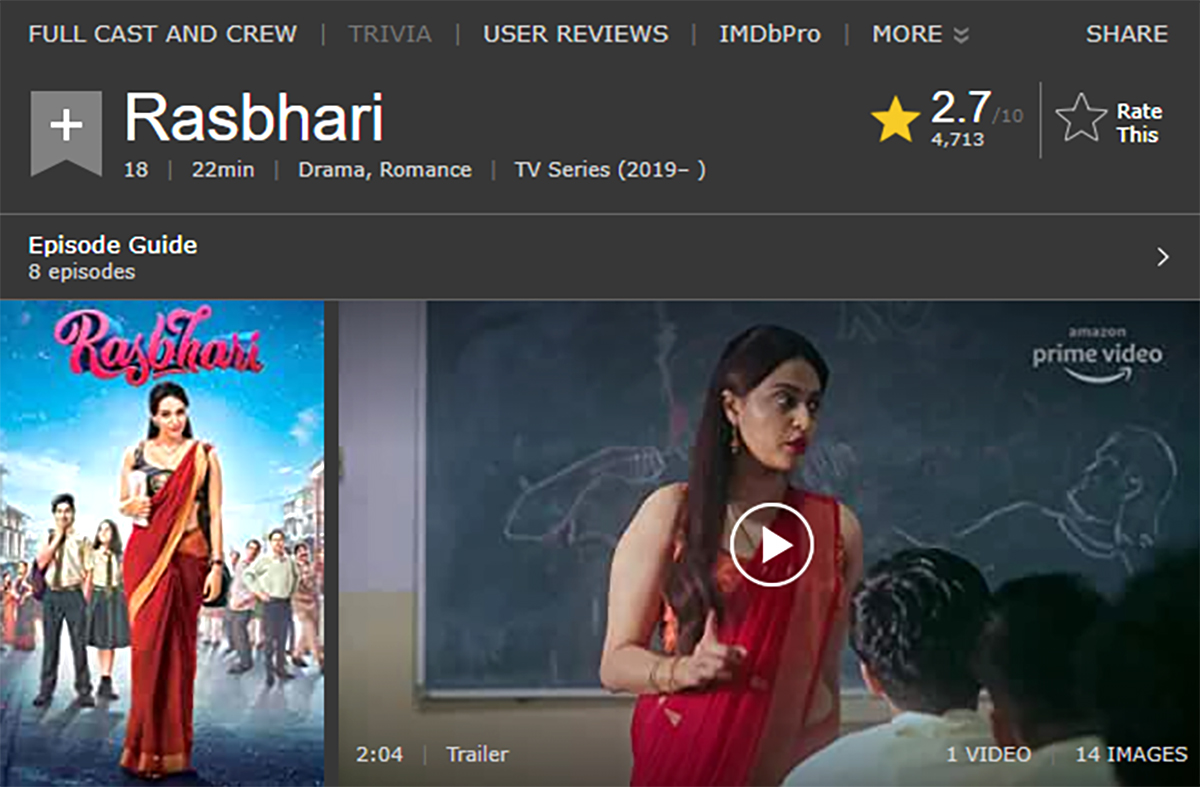 Well, the poor rating on the portal has made us wonder, why so? But as we all know, how Swara has always been on the wrong side of the right-wing groups and has been sharp with her political views on social media. So, can that be the case her series is inviting the wrath and is getting downvoted? Let’s not forget, Rasbhari is new, but Bhasker has earlier also been incessantly trolled by haters for the masturbation scene in Veere Di Wedding. Even Thappad director, Anubhav Sinha tweeted and took a dig at the ring-wings over the downvoting of Rasbhari on IMDB. Rasbhari: Prasoon Joshi Objects to a Scene Showing a Child Dancing Suggestively to a Hindi Song; Swara Bhasker Schools Him on Context (View Tweet).

Dear IMDb your data is being regularly misused. Soon your ratings in India will cease to matter. You like that??? Please Do something about the right wing troll goons spamming your authentic ratings movie after movie, show after show. @IMDb @imdbpro @JeffBezos

Swara Bhasker had also replied to a tweet which highlighted how in this era one can make a career by going to IMDB and give one star out of 10 for the actress for Rasbhari. See the tweet below:

Written by Shantanu Shrivastava, apart from Swara Bhaskar, the series also stars Ayushmaan Saxena as Nand Kishore Tyagi, Neelu Kohli as Pushpa, Rashmi Agdekar as Priyanka along with many other. While, yes the erotica show does win in giving the sensation. However, the final result looks halfbaked. Stay tuned!

(The above story first appeared on LatestLY on Jun 29, 2020 01:39 PM IST. For more news and updates on politics, world, sports, entertainment and lifestyle, log on to our website latestly.com).