Patna, August 10: Indian Police Service (IPS) officer Vinay Tiwari, who is heading the Bihar police’s probe into actor Sushant Singh Rajput’s case, was rumoured to be transferred to the Central Bureau of Investigation (CBI). The rumour gained pace days after the case was handed over to the central agency on recommendation of the Bihar government. A fact-check, however, debunked the fake news.

Users on social media began forwarding a “source-based” claim that Tiwari is sent on deputation to the CBI. The officer was at centre of a political row between the Bihar and Maharashtra government, as the civic body of Mumbai quarantined him last month immediately after he arrived from Patna for investigating the suicide case of Sushant. Sushant Singh Rajput Case: CBI to Visit Late Actor’s Brother-in-Law’s Residence in Faridabad to Record Statement.

IPS Vinay Tiwari who was quarantine some days ago has been transferred to CBI on deputation .#SSRKilledOn14June#RealHeroArnab#RepublicForSushant

Credible Sources have informed that IPS Vinay Tiwari has been transferred to CBI on Deputation.

Vinay Tiwari sent to CBI on deputation. Yes, that Bihar SP who was by force quarantined by Thackrey’s BMC.:)) RT

No mainstream media carried the speculations which turned rife on social media since Sunday. Reporters who contacted the Bihar IPS was confirmed by him that no such transfer orders were issued. The news is completely fake, he had said.

Further, Tiwari took to Twitter to debunk the fake news. He categorically stated that he was not being sent on deputation to the CBI.

Sushant, 34, was found dead at his residence in Bandra area of Mumbai on June 14. The actor died by suicide, as per the autopsy report. The Mumbai police is investigating whether his suicide was abetted. An FIR registered by the Bihar Police, on the basis of complaint registered by the deceased’s father, names Sushant’s close friend Rhea Chakraborty as an accused. 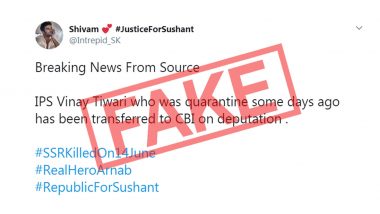 False. No such transfer order was issued. The news was called fake by the IPS officer himself

(The above story first appeared on LatestLY on Aug 10, 2020 05:35 PM IST. For more news and updates on politics, world, sports, entertainment and lifestyle, log on to our website latestly.com).