DisneyPlus Hotstar recently announced in a virtual press conference, their upcoming line-up in the ‘Multiplex at home’ initiative. The streaming platform is all set to bring eight new films for their direct to OTT release and fans are going to be super thrilled about this. With the coronavirus pandemic spoiling the party for all cinegoers with the theatres remaining shut for over two months, the digital releases are now going to become the new normal amid this crisis. We have already seen Amitabh Bachchan and Ayushmann Khurrana’s Gulabo Sitabo have a digital release and now Abhishek Bachchan is also set for his upcoming film, The Big Bull to release on DisneyPlus-Hotstar. The Big Bull Poster: Abhishek Bachchan’s New Look is Intense.

Joining the recently held press conference, Abhishek Bachchan unveiled the new poster for his upcoming film. The poster features Abhishek in a serious avatar giving a rather confident stare. The actor is seen sporting glasses and a business look on the same. The Big Bull revolves around the Harshad Mehta securities scam of 1992. The film also stars Ileana D’Cruz and Nikita Dutta. The Big Bull’s new poster reads, “The man who sold dreams to India.”

Check Out the Poster Here: 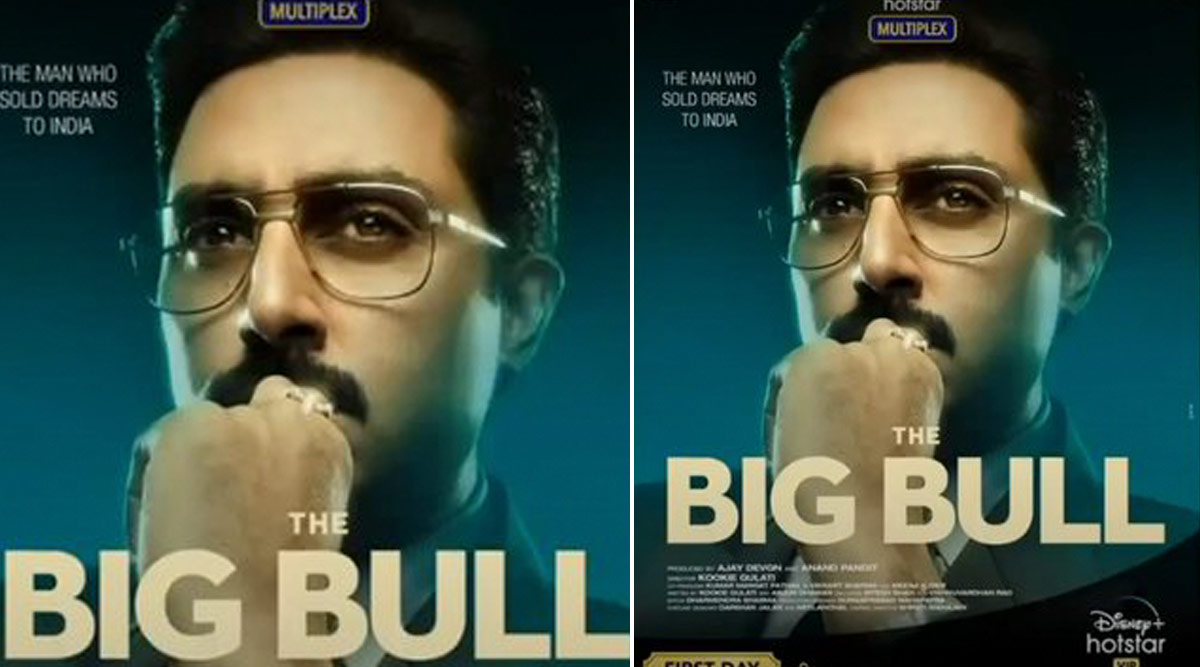 Among other films that were announced in the press conference were also Akshay Kumar’s Laxmmi Bomb, Ajay Devgn’s Bhuj: The Pride of India, Alia Bhatt’s Sadak 2 and more. Also late actor Sushant Singh Rajput’s last film, Dil Bechara will be releasing on DisneyPlus Hotstar. The Big Bull Poster: Abhishek Bachchan Is Imposing And He Wants You To Stay Quiet (View Pic).

As for Abhishek Bachchan, the actor is already gearing up for his digital series, Breathe: Into the Shadows to release on Amazon Prime soon.

(The above story first appeared on LatestLY on Jun 29, 2020 06:14 PM IST. For more news and updates on politics, world, sports, entertainment and lifestyle, log on to our website latestly.com).

Justin Bieber and Hailey Bieber Take a Romantic Trip to Utah and Their PDA-Filled Pictures are Too Cute to Miss!

Sai Ballal to Play the Role of Shakuni in RadhaKrishn

Udann actor Sai Ballal  has been confirmed for the role of Shakuni in the mythological show “RadhaKrishn”. “I am truly grateful for this opportunity. ‘RadhaKrishn’ is my first mythological show in my career span of 21 years. It was the curiosity of an actor, an urge to do something different and that is what made me choose this character. I know the portrayal of role will be a challenge in itself as there are talented predecessors in the industry,” he said. Kabir Singh Actress Geetika Mehandru Joins Choti Sarrdaarni

“I am trying my level best to at least get close to my predecessors, who have played the role of Shakuni in the past and have done full justice to this character throughout their performances. I have also been reading books that are completely devoted to Shakuni and his point of view. Further, I will try to refine this character with the knowledge gained and give a 100 per cent performance,” he added. Khatron Ke Khiladi Reloaded Is Happening: Nia Sharma Roped In To Join Rashami Desai and Sidharth Shukla In The Adventure Reality Show?

“RadhaKrishn” is soon going to hit the television screens with fresh episodes for their upcoming new track, ‘Krishn-Arjun Gatha’. In the past, actors like Gufi Paintal and Praneet Bhat have played Shakuni in different projects.

(The above story first appeared on LatestLY on Jul 09, 2020 07:10 PM IST. For more news and updates on politics, world, sports, entertainment and lifestyle, log on to our website latestly.com).